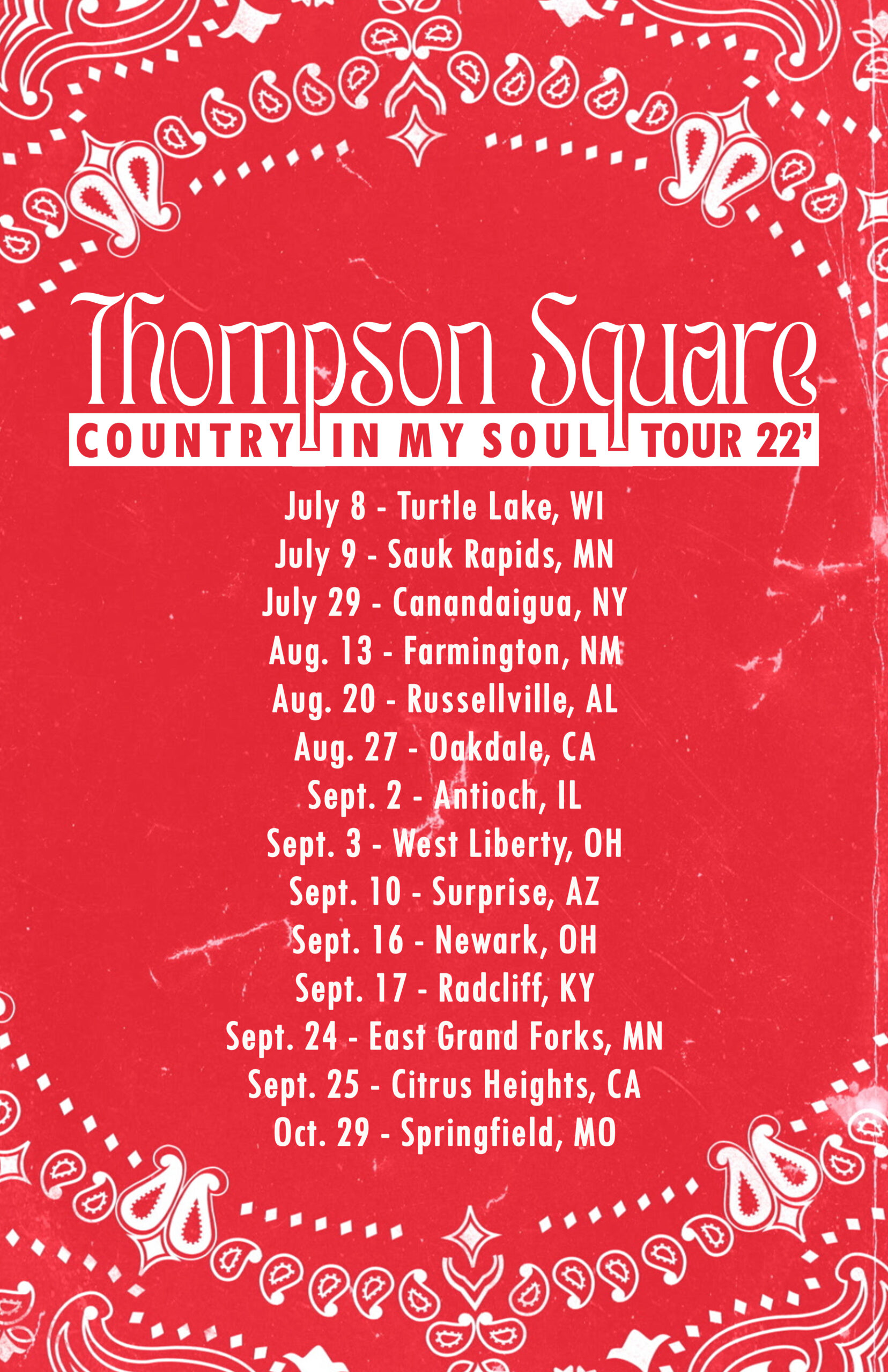 NASHVILLE, Tenn. (July 6, 2022) - Following the release of their highly anticipated new single “Country In My Soul” - which debuted Top 2 Most Added at U.S. Country Radio (MediaBase), two-time GRAMMY® Award nominees Thompson Square announced today their 2022 Country In My Soul Tour. The run kicks off July 8 with a performance at St. Croix Casino in Turtle Lake, Wis., and includes stops across the country - the final performance taking place at Springfield, Mo.’s Gillioz Theatre Oct. 29.

“Country In My Soul,” co-written by the genre’s latest songstress-turned-star Lainey Wilson with Daniel
Ross (“Had Me at Halftime” for Morgan Wallen) and James McNair (“Lovin’ on You” for Luke Combs),
marks Thompson Square’s first single release since 2019’s “You Shoulda Been There,” and their first with
Quartz Hill Records at the helm. In early 2022, they signed with Brown Sellers Brown Management, once
again partnering with label veteran Benny Brown. Alongside Brown, they landed their first No. 1 with “Are
You Gonna Kiss Me Or Not,” subsequent No. 1 “If I Didn’t Have You,” and Top 10 “Everything I Shouldn’t
Be Thinking About.”

About Thompson Square:
Known for romantically charged #1 hits like “Are You Gonna Kiss Me Or Not” and “If I Didn’t Have You,” GRAMMY® Award-nominated duo Thompson Square has celebrated several successes in their 10+ year career, including multiple award nominations and wins, top 10 tunes like “I Got You” and “Everything I Shouldn’t Be Thinking About,” and multi-platinum status. With the release of a new radio single - upbeat, country rock ode to their rural upbringings, “Country In My Soul” - Thompson Square reaffirms their penchant for rollicking anthems and wistful, uplifting balladry that fans have come to know and love. To learn more about Thompson Square, visit ThompsonSquare.com, and follow Thompson Square on Facebook, Instagram, TikTok, Twitter, and YouTube.